With due deference to Charles Dickens, the two cities in this installment are Chicago, Illinois and Manchester, England. Although I now live in the Chicagoland area, I grew up in the Northwest town of Manchester. Both cities are situated near water, Manchester on the Irwell River and Ship Canal, Chicago by Lake Michigan. I will admit Lake Michigan is a little bigger than the Irwell River, but the first tale concerns events that took place a stone’s throw from the river in 1889.

In February 1889, Charles Patton was having difficulty sleeping, and stole a popular insomnia medicine from a pharmacist’s shop; a bottle of chloral hydrate. It worked really well to induce a deep sleep lasting 4 to 8 hours, and was even given to children when they were unable to sleep. Paton realized that if the chloral hydrate put him to sleep, it would work just as well on victims of his thievery. John Fletcher, a wealthy paper merchant from the nearby coastal town of Southport, was visiting Manchester on business.

Fletcher was staying at the Mitre Hotel, and was seen at 5pm talking to Charles Patton on Victoria Street, close to the Irwell River. A short horse-drawn cab ride took them to the Three Arrows Pub on Deansgate, one of the major roads in Manchester. After sampling several of the adult beverages on offer, the pair decided to try out a pub across town, and took another cab. During this last cab ride, Patton removed the stolen chloral hydrate from his pocket and forced the contents down Fletcher’s throat. Despite Fletcher’s struggles, he was soon sedated, giving Patton opportunity to relieve the unconscious Fletcher of his watch, purse and chain. The cab still moving, Paton opened the carriage door and escaped. Unaware of what was going on, the cab driver carried on, till pedestrians alerted him that his cab door was wide open.  Inside, slumped over and completely out of it, was Fletcher. The drugged man was taken to hospital where he later died. Paton was eventually caught, found guilty of robbery and murder and sentenced to death.

Chloral hydrate is a white tastesless and odorless sedative, making people drowsy and sleepy very quickly. It works extremely well when used in conjunction with alcohol, of which Fletcher certainly had a large dose in his system. It is not known exactly how chloral hydrate works, but it is thought that it dissolves in the fatty membrane 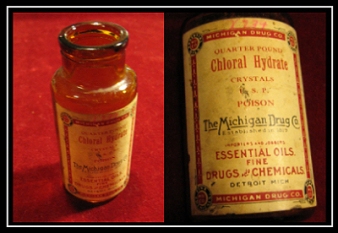 covering nerves of the central nervous system, reducing their ability to send signals in the brain, and back and forth between the brain and the body. Chloral hydrate is also broken down in the body to a chemical called trichloroethanol which works just like barbiturates by inhibiting the actions of the central nervous system. Too much inhibition of the nerves though blocks the signals controlling respiration, and victims of overdoses, simply stop breathing.

At the same time Paton was using Chloral hydrate in Manchester to steal, some 4,000 miles away in Chicago, someone else was doing the exact same thing. Michael “Micky” Finn was the manager and bartender of the Lone Star Saloon and Palm Garden Restaurant in Chicago’s Loop neighborhood, between 1893 and 1903. Several newspapers carried stories reporting that Finn was spiking drinks with chloral hydrate to sedate his patrons and rob them of their watches and wallets. Despite such accusations, the police seemed thoroughly uninterested. By 1903, his lacing of patron’s beverages was so egregious, that even by Chicago standards, he was becoming a nuisance, and was ordered to shut down. Finn was never prosecuted for his actions, but his habit of tipping chloral hydrate into alcohol to induce stupor lives on in the phrase “slipping a Mickey Finn”.