Although I have lived in America for many years now, I was born and raised in the UK. Among the things I miss from the old country is the food. For those of you who have never experienced the pleasure of a bacon butty, or a piping hot pasty, my heart goes out to you. Any discussion of British food would not be complete without a mention of that quintessential British dish, fish and chips,

which has to be accompanied by mushy peas. While I have not been able to find anywhere in America that faithfully replicates this delicacy, I have discovered another dish that I absolutely love; fried catfish. To my mind, the best catfish is found in the South, and two of my favorite restaurants are the Catfish Cabin, and Top O’ the River. Anyone in the vicinity of Anniston, Alabama is strongly encouraged to drive down State Highway 1, and enjoy the River Boat Special at Top O’ The River.

All of this neatly brings me to a former resident of Anniston who concluded that her family members had to be dead before she could claim their life insurance. Audrey Marie Hilley, along with her husband Frank, and two children, Carol and Mike seemed to be a happy middle-class fa 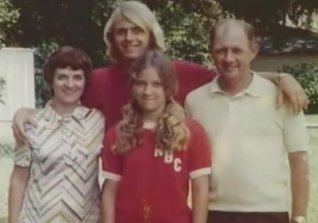 mily.  However, despite the outward appearance there was a darker side to Audrey. Despite money coming in from Frank’s job, and her job as a secretary, Marie’s excessive spending habits, that exceeded their income, led to friction within the marriage. One afternoon, Frank Hilley arrived home early from work, expecting to find Audrey in the kitchen. Certainly, Marie was home, but not in the kitchen – she was in bed with her boss. This wasn’t Marie’s first infidelity, and had sought out several successful wealthy men who were willing to give her money. Although Marie stuck with Frank and his meager income, she was already planning on how to spend an upcoming windfall.

Marie had decided on a new strategy for cash flow; life insurance. In 1975 Frank became very ill. He couldn’t eat anything, and anything he tried to eat was quickly vomited back up. In conversations with his sisters, Frank mentioned that Marie had to learn how to give injections, since the doctor had prescribed medication that needed to be regularly injected. But far from treating his illness, Marie’s injections are slowly killing her husband, with arsenic from rat poison. Finally admitted to hospital complaining of nausea and abdominal tenderness, tests showed that Frank’s liver was on the verge of shutting down. In the early morning of 25th May, 1975, Frank was dead, and Marie waited in anticipation for the $31,140 life insurance policy payout.

Although a single large dose of arsenic will kill, it is also effective in many smaller doses, as the arsenic gradually accumulates in the body. In low doses, arsenic causes headaches, nausea and vomiting, with gradual paralysis of the limbs. Heart arrhythmias may also occur. Arsenic binds tightly to sulfur atoms in proteins, and when those proteins are involved in energy production within cells, the process becomes disrupted to the point cells run out of power. When enough cells run out of energy and die, it leads to organ failure, which is what happened to Frank’s liver. In chronic poisoning, arsenic starts to injure the nerves that stretch from the spinal cord to the muscles of the arms and legs. When these nerves are damaged, sensations of pain and burning can be felt in the hands and feet. The nerves are no longer able to control the limbs, and feelings of weakness and paralysis ensue.

Despite the $31,000 payout, Marie’s extravagant spending habits meant that the money quickly started to rub out. Marie needed another source of cash. Her daughter, Carol, is now in hospital with a mystery illness. The doctors are stumped, but Marie knew exactly what was wrong, and had convinced her daughter that the injections she was giving would soon make her well. Marie had insured Carol’s life, and now she wanted the money. An astute doctor noticed transverse white lines (known as Mees lines) in Carol’s fingernails, a clear sign of heavy metal poisoning, and likely arsenic. Now knowing what is causing Carol’s illness, constant medical attention saves her life. But to convict Marie, police need more evidence of poison. That evidence was found in her husband Frank’s exhumed body, where pathologists found over one hundred times the amount of arsenic that would be expected to be found. Marie might have murdered her whole family had she not been caught. She was charged with the murder of her husband, and attempted murder of her daughter. Marie received a life sentence for her husband’s murder, and 20 years for attempting to kill her daughter. In a final twist, Marie became a model prisoner, and was even allowed out of prison on several one-day passes. In February 1987, Marie was given a three-day pass, but never returned to prison. She was found crawling around in the woods surrounding Anniston. Marie died from hypothermia on 26th February, 1987.